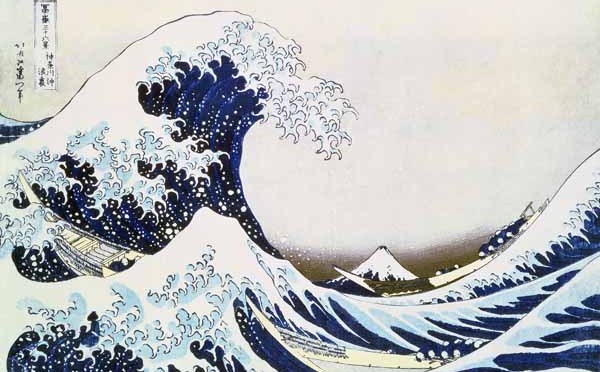 Woodblock prints had been an inexpensive way of reproducing texts and widely used by Buddhist monasteries since the 8th century, when Hokusai Katsushika (1760 – 1849) dabbled in the art and ended up being part of an art movement that would revolutionize the art forms of 19th century Japan. This re-emergence of the initial textual prints as pictures, during the Ukiyo – e movement in which Hokusai also played a part, was welcomed by the citizens who had borne the brunt of the contention between the daimyo or the ruling lords of power and the military during the entire Middle Ages and beyond. Due to these skirmishes the development of woodblock printing in Japan seems fragmented.

Known as Ukiyo – e in Japan, woodblock prints or ‘pictures of the floating world’ sought to depict the common fleeting pleasures the common man. The Ukiyo – e movement was founded by 17th century artist Hishikawa Moronobu and included other notable artists of the age such as Hiroshige, Hokusai, Utamaro, and Sharaku. Kabuki theatre and brothels were the main subject matter till artisans in the 19th century started focussing on bird-and-flower themes and landscapes.

Print making was an arduous task for the 17th century Ukiyo – e printmakers. Monochromatic ink drawings were used to make simple prints and the artist would note down suggestions for colour at this stage. Next, a skilled engraver would transfer this design to a cherry or boxwood block and carve in relief. Impressions from such a block could either be hand coloured or the uneconomical polychrome prints; Nishike – e (brocade prints) – a task complicated by the use of, mica, precious metals and embossing plus multiple coloured blocks requiring precision work.

Hokusai was a prolific artist who, as an impressionable 18 year old, trained with Katsukawa Shunsho, a skilled painter and colour print designer. Katsukawa had a unique ability to push past traditional painting techniques and he produced more than 30,000 colour prints and book illustrations. Following in his teacher’s footsteps, during his entire lifetime Hokusai produced as many as 30,000 works inspired by Ukiyo – e and famous Japanese legends. His style was characterized by free curving lines in the beginning which later evolved into a series of powerful spirals. Large, broken strokes, however formed the basis of his later work which was just as versatile as his earlier experimental one.

He made single sheet prints of landscapes and actors and surimono (printed things) such as greetings and announcements. His most famous work is “In the Hollow of a Wave off the Coast at Kanagawa”. This and other works by Hokusai show an effective usage of fragmentary foreground elements, such as the Lake Suwa, the Incume Pass, the Sumida River or a shadowy summer storm,  to frame the distant view of the Mount Fuji in that Mount Fuji is viewed from afar from various angles.  His other famous work is his 13 volume sketchbook with block prints – the Hokusai Manga, called “Thirty Six Views of Mount Fuji.” “Fukojuso” is another set of 12 prints which celebrates passion and flesh.

Ironically, Hokusai’s work in wood is generally more appreciated in the West than in Japan because it is known as one of the influences in spawning the Impressionist movement and the Art Nouveau style, having influenced several renowned artists of the age such as Claude Monet, Edgar Degas and Henri – Toulouse Lautrec who enthusiastically collected his imported work in Paris. Interestingly enough, this influence was purely accidental after several of Hokusai’s works were used as packing material for a box of Chinaware delivered to Felix Bracquemond, a French Impressionist painter and etcher, in 1856.

Hokusai woodblock prints can be ordered online or are available in exclusive art shops in Japan, the Far  East and selected shops in Europe and America. Prices range from approximately $30 to $35 per print.

N.B. A shorter version of this article has been published as a box feature in Daily Dawn Newspaper, Karachi, Pakistan 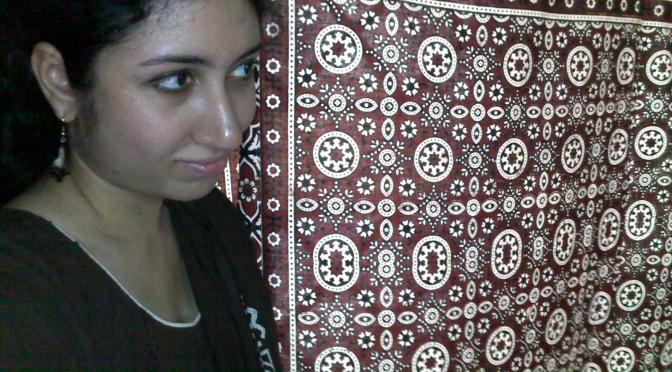 Sindh is a land rich in its share of ethnic handicrafts including the manufacturing of high quality and impressively priced wooden handicrafts, textiles, paintings, handmade paper products, and blue pottery etc. 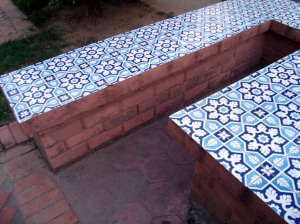 Kashi, or kas, was formerly the Persian word for all glazed and enamelled pottery irrespectively; now it is the accepted term for certain kinds of enamelled tile-work, including brick-work and tile-mosaic work. In Pakistan the finest examples of kashi work are in the Sindh province. Kashi work consisted of two kinds:

Some authorities describe tile-mosaic work as the true kashi. 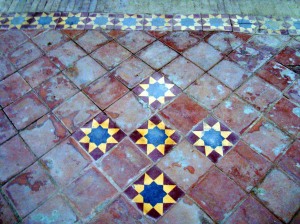 The name kas, by which it is known in Arabic and Hebrew, takes us back to the manufacture of glass and enamels for which great Sidon – a city of Phoenicia – was already famous 1500 years before Christ. The designs used in the decoration of Sind and Punjab glazed pottery also go to prove how much these Sindhi wares have been influenced by Persian examples and the Persian tradition of the much earlier art of Nineveh and Babylon. Hyderabad (Sindh), possesses excellent monuments of the best period viz. Those erected during the reigns of Akbar and Jahangir (A.D. 1556-1628). Tile-mosaic work is described by some authorities as the true kashi. From examination of figured tile-mosaic patterns, it would appear that, in some cases, the shaped terracotta had been cut out of enamelled slabs or tiles after firing; in other examples to have been cut into shape before receiving their facing of coloured enamel.

* Photos by the author

All content displayed on this site is original and the intellectual property of the author Kiran Bashir Ahmad unless indicated otherwise.

No content should be reproduced in any form without the written consent of the author.