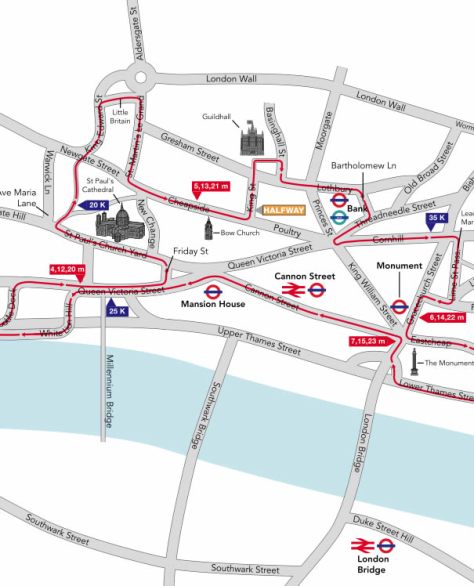 The Marathon owes its name to a city in Greece. It is from here according to Plutarch’s accounts that a messenger from the Battle of Marathon, Pheidippides ran all the way till Athens to announce victory over the Persians and then dramatically die on the spot. Interestingly, the same route was revived during the 2004 Athens Olympics. Though the historical accuracy is debatable, the legend was immortalized as a poem by Robert Browning in 1876.

The Marathon was initiated as a crowd puller for the first Olympics in Athens in 1896. It started off as a male only race with females being introduced in the women’s marathon in Los Angeles in 1984. Since its inception it is traditional for the men’s marathon to be the last event of the athletic’s calendar.

There was no standard distance for the first 7 Olympic Marathons but eventually the distance was fixed at 42.195 km or 26 miles and 385 yards. With the London Olympics 2012, just round the corner, it should be of interest to note that it was the 1908 London Olympics that brought about this fixture as a result of a deviation from the approximate 40 km distance following the original from Marathon to Athens. This deviation was the result of a wish by the then Princess of Wales who wanted her children to see the start. The race was thus moved to the East lawn of Windsor castle adding 2 kms to the planned 40 kms. Moreover, 385 yards were added to the finish line in accordance with Queen Alexandra’s wishes to have the best view, thus making the atheles run on a cinder track right up to and below the Royal Box. Here’s looking at you will get a new twist this time it seems as the route has been chalked out for the atheletes and viewers to get the maximum benefit – passing through all the major London landmarks on the way.

While the Marathon is an event of great significance in the Olympics, recreational runners may also take part in other marathons being held around the globe on an average of 800 marathons per year. The goal then becomes to break one’s previous time barriers or simply to finish under the average time of 4 hours or 3 hours if one is more competitive. Ethical considerations are followed with recreational runners keeping to the side to allow faster runners to pass through the centre.

Preparations for the Olympic Marathon are on in London. While the  last Beijing Olympics had Tiananmen Square as the starting point, the London Olympics can wager a promising start at the Mall within sight of Buckingham palace. With the Diamond Jubilee Celebrations still in the air, this addition would undoubtedly come as yet another jewel in the Crown. Past races have been run over both high and low terrain with perhaps China being one of the few countries to boast of diversity and variety in the race. China’s past ventures show both interest and creativity as far as the marathon is concerned. The famed race has been run as ‘The Great Wall of China Marathon” over the Wall itself and through the Tibetan plateau region as “The Great Tibetan Marathon”.

During the last Olympics, the enthusiasm for the games was slightly marred by the environmental concerns, especially the pollution levels and unprecedented smog in Beijing. Haile Gebrselassie from Ethiopia, the men’s marathon world record holder clocking 2 hours 4 minutes and 26 seconds in 2007 backed out then, amidst fears for escalation of his asthma. Similar fears were voiced by other asthmatics including Paula Radcliffe, Britain’s world record holding marathon runner about the pollution, the heat and the humidity.  The media’s role had too been paramount in spreading rumours and increasing the hype by publishing news stories and photographs showing the Beijing National Stadium – ‘the Bird’s Nest’, engulfed by smog early in the morning.

This time round, the reports are coming through yet they are staggered at best, while the conditions appear to be no different. London reportedly has been warned by EU for its poor air quality, having the highest levels of nitrogen dioxide in the EU as well as dust particles. So far scientists and research students seem to be the strongest voices regarding this aspect of the marathon. It would be interesting to hear from Paula Radcliffe this time round, on her home advantage or disadvantage as the case may be. While Beijing in 2008 shut down the major industries and banned half the city’s transport contributing to the smog, Britain has yet to come up with a similar plan. With health concerns for the atheletes and their optimum performance slowly rising, the British public and the rest of the world wait with bated breath to see what the Marathon brings us all. More controversy or an entertaining finish till Tower Hill.

Stereotypes sometimes exist with good reason. In the world of distance running, Kenya has produced exceptional athletes to date and has geographically given the region a name in stamina. However, a closer look reveals that most of the athletes have come from the Kalenjin tribe – a minority near the Rift valley, including hardly 11% of the Kenyan population. This has prompted researchers to study nvironmental and psychosocial factors surrounding the Kalenjin.

Research findings are eye openers. Unfavourable living conditions are uppermost in spurring Kenyan and particularly, Kalenjin youngsters towards running, in order to carve out a better future. International Kenyan runners have reportedly gained power, prestige and wealth, being among the few able to buy vast acres of farmland and getting much envied jobs in or being backed by the Kenyan Army and Kenyan Police. Adding to the aforementioned impetus are the favourable genetic components, the fact that running is inherent in the Kenyan way of life, and that the stamina is further developed by the 7,000 feet high altitude, moderate climate and a diet rich in energy giving cereals.

The pace was set for Kenyan supremacy in distance running by Kipchoge Keino who not only defeated the American favourite Jim Ryun in the 1500 m to win a gold medal at the 1968 Mexico City Olympics, but also won by the largest winning margin in the history of the event – a record 20m. He went on to win yet another gold medal at the 3000 m steeplechase at the 1972 Munich Olympics.

Henry Rono was the next Kenyan to attract international attention when he broke 4 distance running records during the 1978 season. However, he could not make it to the Olympics due to Kenya’s boycott during his peak performance years. He has recently written his autobiography titled Olympic Dream (2007).

Paul Kibii Tergat nicknamed the ‘gentleman’ has dominated the marathon from 2003 – 2007. He has won silver medals for Kenya in the 1996 and the 2000 summer Olympics though he names cross country running as his passion rather than the marathon.

Catherine Ndereba, a marathon runner has a silver medal in the 2004 Athens Olympics while she has won several gold and silver medals at both international and continental championships.

The overall Kenyan picture presents a rags to riches story for most of the athletes
including Kipchoge Keino and Paul Tergat who have done brilliantly for themselves and their communities setting up schools in impoverished regions,
working towards combating malnutrition or even launching their own brand of
designer wear. Others such as Henry Rono have fallen to excesses such as alcoholism and mismanagement of their wealth resulting in penury.

Given the previous records of this powerhouse, it was not unusual to expect a Kenyan victory in distance running in the 2008 Beijing Olympics, yet it was a female runner from Ethiopia who clocked a world record at the 2008 Olympics in the 5000 metres. Luke Kibet, winner of the 2007 World Marathon Championship had been a favourite to win an Olympic Gold. However the post election ethnic violence in Kenya spurring a rift between the Kalenjin and the Kikuyus left him with a concussion and five stitches to the head. The wounds healed but the emotional scars did not. Fellow runners Lucas Sang who competed in the 1988 Olympics and Wesley Ngetich were brutally killed during the violence. Several others like Catherine Ndereba, Lucia Kimani (a Kikuyu), and marathoners Robert Cheruiyot and Martin Lel received death threats that disrupted their training schedules.

In spite of it all, the resilience of the runners has proven exemplary during the events leading to the Beijing 2008 Olympics and beyond. As we drift towards the 2012 Olympics observing how some runners have gone so far as to secretly escape to Namibia for training, it remains to be seen whether the lessons learnt from the endurance on the ground prevail on the field.

All content displayed on this site is original and the intellectual property of the author Kiran Bashir Ahmad unless indicated otherwise.

No content should be reproduced in any form without the written consent of the author.